Skip to content
Foundation for Labour and Employment Promotion.

Even though national statistics showed the vital role of informal workers in contributing to national
economic growth, they are still largely invisible in the society. They have less opportunity to access to the
national development. No legal acceptance to get labour rights standard. Working with highly risks from
irregular jobs, low paid, long working hours and other poor working conditions with limitations of social
protection system providing from the state.
Homeworkers Network was established in June 1992 from home-based producers as well as
concerned NGOs in Bangkok, the North and the Northeast of Thailand under ILO project on Social
Protection Promotion. After the project closed down in 1996 the network keep on operating until present
in the title of “Informal Workers Network” or “HomeNet Thailand” In1998, NGOs working within the
network established “Study and Development Center of Homeworkers” as the coordination center of
HomeNet Thailand with later on, in 2003, registered as “Foundation for Labour and Employment
Promotion”.

In the beginning, the foundation through regional networks has been reaching out to home-based
producers both self-employed and sub-contracted workers. Later on, the foundation expanded its
activities to cover other groups of informal workers for instance contracted farmers, waste pickers,
domestic workers, motorcycle drivers and workers in services sector. The foundation work directly with
those target workers or work through their supporting NGOs.

During late 2007, there were about 151 groups of informal workers affiliated to the network,144
are home-based workers, 14 groups of agricultural groups and the other 3 groups from services sector.
Within 151 groups, there are 6,637 workers, 1,606 male and 5,031 female. These workers were involved
in about 40 occupations such as sewing, shoes making, food processing, gem cutting, cloth weaving,
basket weaving, doll making, wooden toys making, boat maintenance, shrimp processing, crab
processing, agricultural production, local fishing and mulberry paper making etc.

Homenet Thailand is operating through the regional networks which have autonomy to develop
their own regulation or bylaws. The national board members were nominated from each region. It
consists of 21 committee members, 4 representatives from each region. The president as well as other
officials is elected among the regional representatives. The board member meets every 3 months, 4
times a year. The duty of the national board is to supervise and monitor the activities at the national level,
as well as fund raising for the national and regional activities. The overall information of each network is;

Northern Homebased Producers Network consists of 2,473 self-employed and subcontracted workers engaged in 85 Groups. These groups located in 8 upper Northern provinces, Chiangmai, Chiangrai, Lampang, Lumpoon, Phayao, Uttaradit. Nan and Phrae. Most of its members are engaged in handicraft production such as sewing and food processing.

Northeastern Women Network consists of 1,465 members from 23 groups of home-based producers and contracted farmer located in 6 provinces in the northeastern part of Thailand, Khon Kaen, Roi-et, Surin, Nakornratchasima, Srisaket and Sakolnakhon. They are involved in the

Roles of the Foundation

Study and Research
During the past decade the foundation tried to make informal woekers visible by working closely
with the National Statistics Office and Ministry of Labour to address informal workers’ issue as their
agenda. Meanwhile, researches and studies were conducted to disseminate data and information
concerning informal workers to the society. Some of the researches and studies are Social Protection for
Women Home – based Workers; The Informal Workers in Thailand: the Case of Banthi Homeworkers
Group; Supporting Potential Women Exporters: A Case Study of the Northern Homebased Workers
Network, Thailand; Impact of the Economic Crisis on Homeworkers in Thailand; Social Protection
Scheme for home-based workers; Occupational Health, Safety and Working Environment of workers in
informal economy.

Organizing and Networking
Primary task of the foundation is to organized and build up the network of home-based workers and
strengthening them. At present, not only home-based workers are in the network, but other workers in
informal economy such as contracted farmers, motorcycle drivers, waste pickers and vendor are also
participated in the informal workers’ network. Likewise, collaboration with workers in service sector and
domestic workers were supported. The foundation delivered knowledge on group organizing, leadership,
labour rights and laws to the workers through regular meetings, trainings and study trips.
Economic empowerment
In order to enhance economic situation of home-based workers, the foundation launched activities to
build their capacities on entrepreneurship, managerial skills, product development, marketing and clustering.

Promotion of Occupational health, safety and working environment
The foundation studied and launched activities on occupational health, safety and working environment
(OHS) of home-based producers. Knowledge and experiences were collected as well as production of
training materials, mass Medias and clean technology on OHS and transferred to home-based producers.
Pilot projects to help them coped with the problems were implemented. In addition, the foundation

developed model areas where all partners integrated their works to promote OHS such as Public Care
Unit, Tambon Administrative Office, worker organizations and academicians. Further step, the foundation
will try to campaign and push OHS of informal workers as agenda in the policies of Local Administrative
Authorities.

Laws and policy advocacy
Campaign and advocate to legitimate home-based workers and others laws and policies to protect and
support informal workers such as organized policy dialogues and drafted a homeworkers Bill. Progress
from these campaigns convinced the government to push forward the homeworkers Bill which draft by
Ministry of Labour. Besides homeworkers Bill, the foundation together with other partners also advocate
for ministerial regulation on domestic workers and fair contract for contracted farmers. 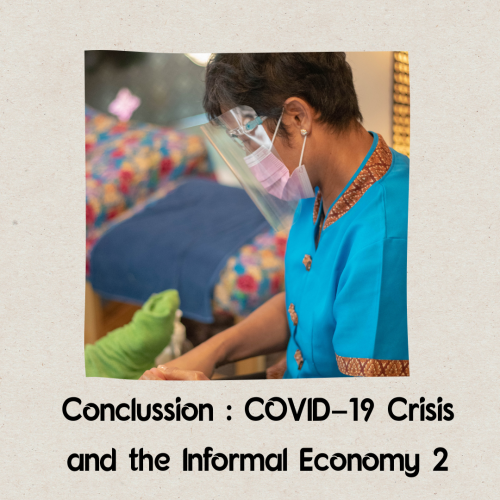 COVID-19 Crisis and the Informal Economy in Bangkok: Lasting Impacts and an Agenda for Recovery Facebook iconFacebookTwitter iconTwitterLINE iconLine Covid-19 Crisis and the Informal Economy in Bangkok, Thailand : Lasting Impacts and an Agenda for Recovery Facebook iconFacebookTwitter iconTwitterLINE iconLine